Prologue: As far as the magazine came with a record, you can listen to it on this page. Just go the relevant issue. Here’s an example from #18:

When I started h’artbeat in 1984, the approach – for one issue – was somehow different. I wanted to publish a magazine that combined music with arts and literature, and after I had put out issue #1, I got the flak by all those record collecting music enthusiasts, asking me what those poems and works of art were supposed to do in h’artbeat!. I – chicken that I was – gave in too easily and stuck to music instead of my initial plan. In order to give the new h’artbeat (as it was first called) a proper debut, Gerard Davelaar had acquired a big box full of wonderful 7″ records by the Dutch neo-garage band THE THOUGHT. Thus we were able to grace h’artbeat!’s debut with a 7″ freebie. The A-side was a very psychedelic cover of the Electric Prunes‘ „I Had Too Much To Dream Last Night“ (even including harpsichord), the B-side a band composition: „These Days“. It’s a real classy record, and I was quite pleased to enclose it with issue #1. 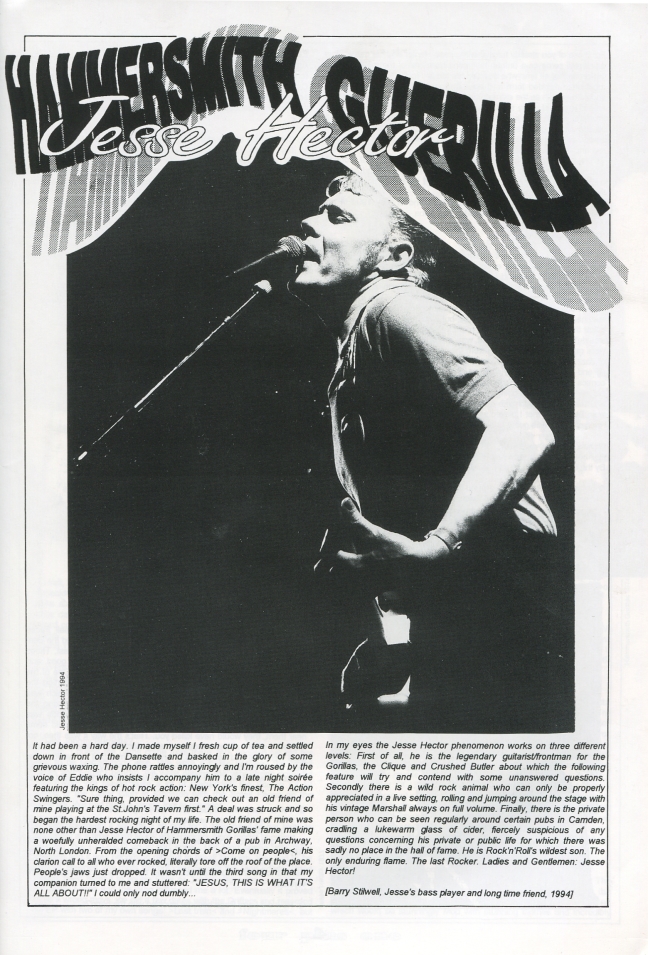 H’ARTBEAT!s #2 and #3 were printed with the help of Gerard somewhere in the Netherlands, but the print run was not high enough to meet the demand, and so I was back at Hitzegrad’s for no.4. #2 and #3 were of a different format (#3 additionally came in five differently coloured covers), I liked it but I never got a positive response. For #4 I was back to A4. And I stuck to it.

From #4 on I never looked back. Each issue of hartbeat! had more pages and the artwork got more and more fanciful. A lot of people were entering the boat – and again, no one ever got paid except for the odd parcel of free copies. I still did 99% of the artwork and most of the writing, but people like Uli Hesse (soon Uli Hesse-Lichtenberger, now Uli Hesse again, and a well-known author and exquisite sports journalist) offered his New-York-Dolls attitude, Tom Sobilo his Indie Rock, Beverly Patterson her Power Pop knowledge, and suddenly Nigel Cross was a member of the team, and he knew (knows) just everyone in the history of British Underground. What more can you ask for? And by #18 we also had Ulf Nawrot on board to supply wonderful cartoons and competing Ari, who was still sending stuff – more than I could use. And these illustrations came in wonderful envelopes accompanied by dear letters. 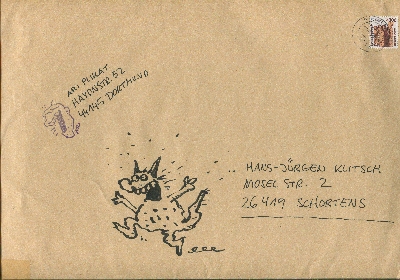 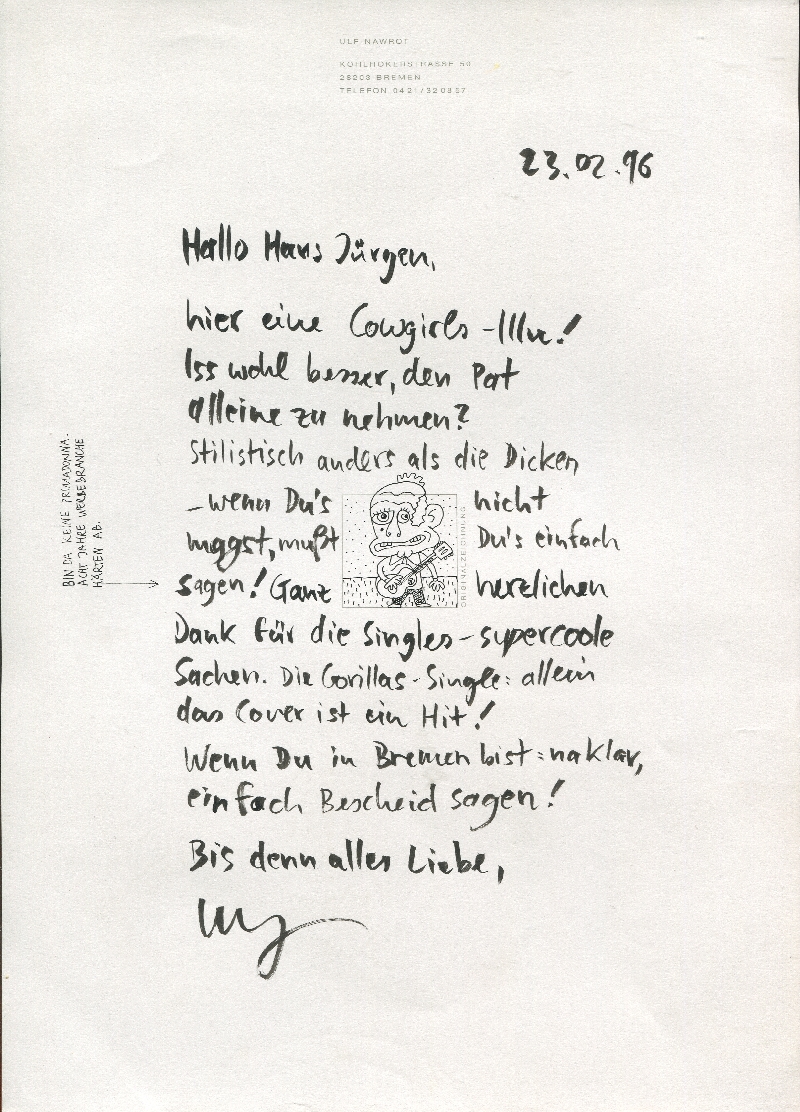 I don’t really remember how I managed all the work on the magazine – I was responsible for the whole logistics, 95% of the artwork (Uli, perhaps with the help of his gorgeous wife Sabine, graced his pieces with his own artwork, thankfully), about 70 per cent of the writing, the bookkeeping, the mailing, delivering (as far as Amsterdam), shipping – with a day job to do that did not suffer at any time. Nor my family. But I did manage, and I remember when my wife was pregnant with our second child I took 10 days off with our first-born in a coastal resort (Callantsoog) in the Netherlands in our Easter holidays, and when I had taken her to bed after spending the day at the beach, I did hartbeat! magazine artwork until six in the morning (fuelled by a piece of exquisite green Lebanese – my fave stimulant then – from an Alkmaar coffee shop) and after two hours‘ sleep I ventured to the beach again with Annika. I never compromised on being a caring father – my girls and my wife will attest to that. And I never compromised on being a committed teacher – my students and their parents will attest to that also.

I never paid myself any money out of the hartbeat! account, I did not even get my petrol money back or the expenses on stationary or whatever I needed. It’s what you call self-exploitation, but hartbeat! as a magazine just carried itself. It was purely the fun of doing such a fanzine that was my motivation. But by the end of the 20th century, I was given the ‚red card‘ by my family physician – and I got myself a dog. I’ve never looked back. 18 years later, and we’ve got Elli, and she’s taking me out for a walk – and occasionally some physical exercise – at least twice a day. I’m a lucky guy. 1

Let’s wind the clock back a few hours: Gorilla Beat #13 had been very special. It was our first try to enclose an audio recording to illustrate the music we wrote about. The Slickee Boys of Bethesda, Washington D.C., had sent a tape of a live version of „A Long Way To Go“ to be converted into a flexi disc by us. We mailed it to Sonopresse in Rotterdam to have a six inch flexi pressed (6″ because Gorilla Beat was A-5-sized). The 1.000 copies of the flexi were delivered – no joking – by river barge to be picked up at Duisburg-Ruhrort. They came without sleeves in a flimsy cardboard box with the silver paint obviously not dry when packed and thus smeared everywhere – and apparantly the barge had transported bulk goods and the sonopresse box had been stored underneath them all. To make matters worse, the package with the tape had obviously been x-rayed at the customs in the Netherlands on its way to Rotterdam and thus the sound quality was a far cry from what we had expected. But even this experience couldn’t keep me from having a go at flexi freebies again, and so from hartbeat! #7 onwards there was a flexi with each issue, and from #15 onwards a vinyl 7″ EP. #15 also marked the end of the Brother Word Processor era and the change to a personal computer, which, of course, resulted in a different artwork. And for me, #15 comes out as the most creative issue. I still page through the magazine with the outmost feeling of delight. Damn wonderful, I keep saying to myself. 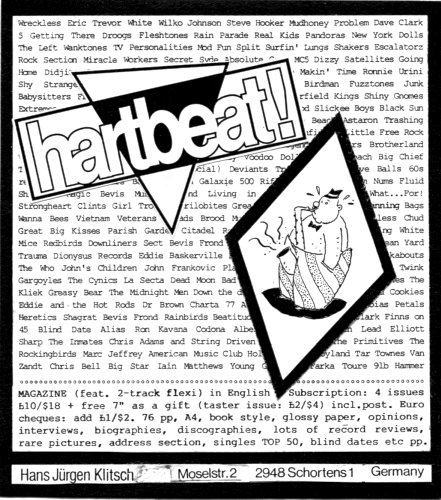 In #12 the infamous hartbeat! „Blind Date“ debuted. In a blind date a musician is played (ten) songs but not told who the performers are. He is then asked to comment on them – occasionally making a big fool of himself. In the original Melody Maker Blind Dates the datee was put out of his misery at the end after he’d made his comments, but in hartbeat! he could only read it after the magazine had been published. The first datees were Bevis Frond (aka Nick Saloman) and Andy Ellison, and they really set the standard for the following blind dates. Well, occasionally the Blind Date was not printable as it would have killed a musician’s reputation on the very spot. I remember a very stoned Marie and Cliff Ulsberger (two thirds of Wanda Chrome & The Leather Pharaohs) making complete idiots of themselves by not recognising the Rolling Stones and putting them down or giving the thumbs down (unknowingly) to Bob Dylan, Otis Redding, Pharaoh Sanders and the like… yet they kept on giggling all the time.

hartbeat! #17 was another highlight, as it included two 7″ EPs, one sponsored by Emilio Winschetti and Willem Kucharzik of Hidden Records, one paid for by me. In those days records and CDs came in by the dozen every day and it became a burden to give them all a spin, and occasionally I would write a review by just looking at the cover. Siegfried Kalus had the brilliant idea of writing about rare Punk compilations that didn’t exist. The fake LP. After publishing these record reviews, people wrote and gave us the thumbs up, as they would absolutely agree with us: it was one of the coolest records around. They had enjoyed every second of it.

And: #17 also was the first issue with a four-colour cover.

In „High Fidelity“ Nick Hornby said that women have got opinions, but men have got charts. hartbeat! was obsessed with charts. Here’s one from #21

and further down you have more, mostly illustrated by Ulf. So: with #19 we started to publish TOP 100s of our regular writers, starting with the Top 100 albums, then TOP 100 singles, then TOP 100 singles B-sides. These caused a lot of discussion among readers – naturally, as everybody has inevitably got his own idea of the 100 best albums or singles. It was great fun and they even made it as far as an own website run by a reader.

The TOP 100 EPs were never published, because by 1998 I was exhaustingly working on „Shakin‘ All Over“ and I decided to close the hartbeat! shop, something I had said I’d do perhaps four or five times before. Music had become a bore, too many promo records and CDs on my doorstep, demanding to be listened to and written about, even if I didn’t feel like it. Close friends, whom I had worked together with for many, many years, failed to honour their bills, even telling me bold lies. I will never forget how a distributor in Berlin, when asked to pay his bill, said to me that he’d already signed the cheque and it would be mailed the following day. When I phoned the same guy again 4 weeks later, he told me that the cheque was lying just in front of him, ready to be signed and thus to be mailed tomorrow morning. It failed to arrive, though. And with more and more – especially British – distributors not honouring their bills I got really frustrated. With 144 pages, issue #21 had really gone over the limit also. It was a relieve to lay the burden down and finally be able to breathe again and go on holiday and not have a box full of artwork to be patched up in the car boot. Or deal with egocentrics like W.D. anymore.

14 years of hartbeat! just were enough.

…to be completed … soon!

Below you can see what the mag was all about (60s‘ artists in green, 70s‘ artists in blue); some back issues are still available: 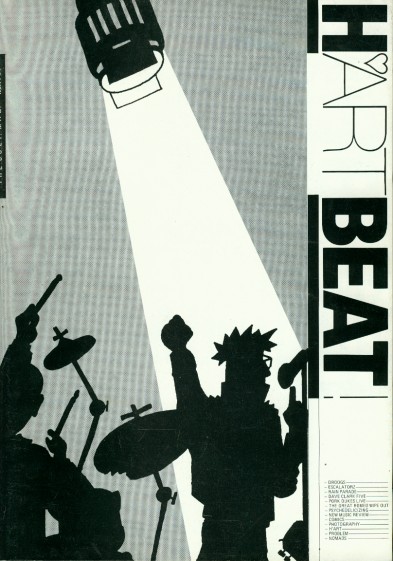 #1: The Dave Clark Five, The Escalatorz, Rain Parade, The Pork Dukes, The Droogs, The Nomads, The Beatitudes, Problem, The Fleshtones, Psychedelic cover versions.

The cover was designed by Gerard Davelaar, the drawing was done by Jan de Boer. It’s my wife Linda on the backcover! 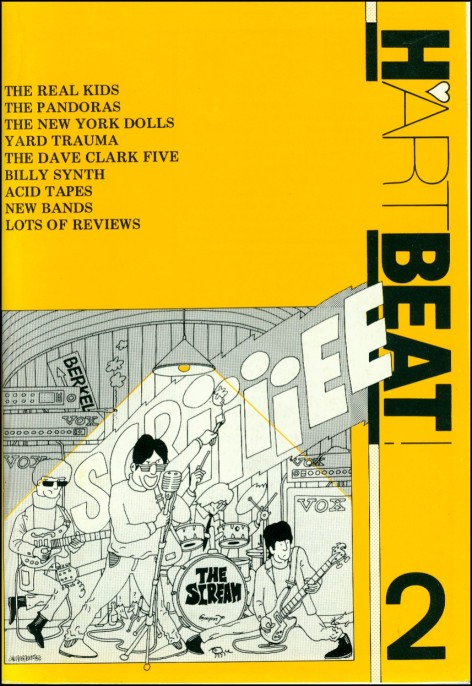 This was also issued in red, blue, green and beige. 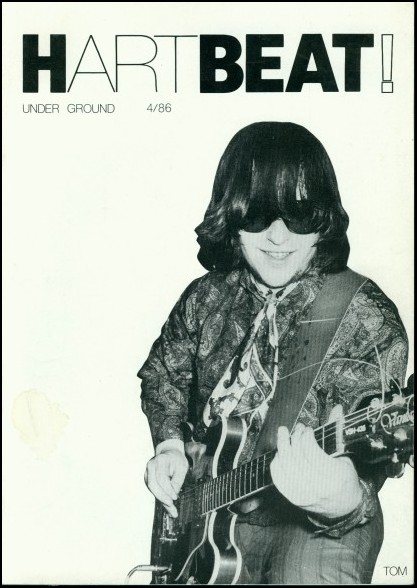 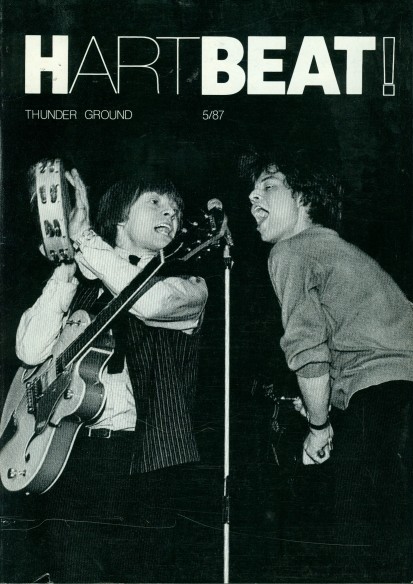 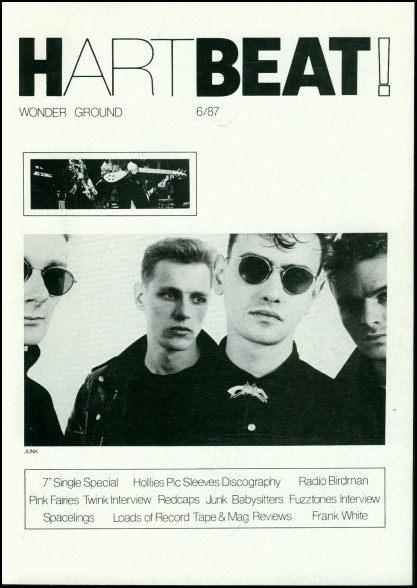 #7: The Mock Turtles, The Thanes, Shamen, Miners of Muzo, The Rainbirds, The Extremes, The Chesterfield Kings, A history of Twink bands vol.1, David John & The Mood history, Casey Jones & The Governors history, plenty of 60s, 70s, and 80s CD, LP and 7″ reviews, books, fanzines, etc. + 45rpm flexi disc: THE BEATITUDES „Where Are You“.

The first issue with a flexi disc.
Cover by Hans-Jürgen Klitsch. 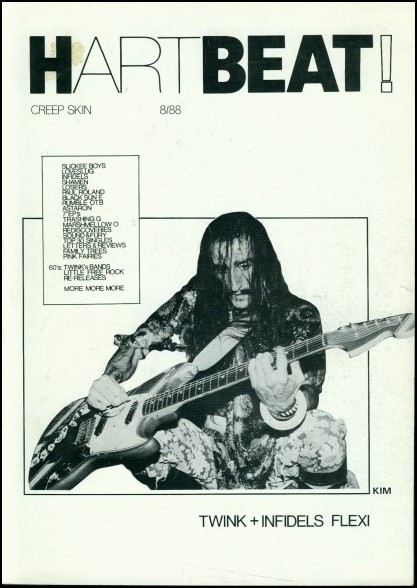 The Brood were an all-girl-band in the 80s, and my fave Garage Rock girl band. And after I had reviewed The Brood’s single(s), the band sent me their LP and their guitarist’s Top Ten list. The Brood’s  Chris Horne faves-min 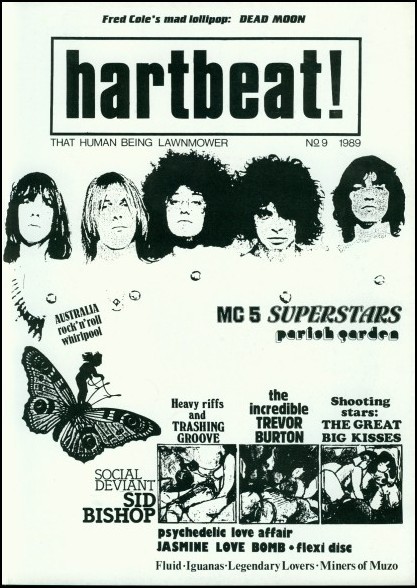 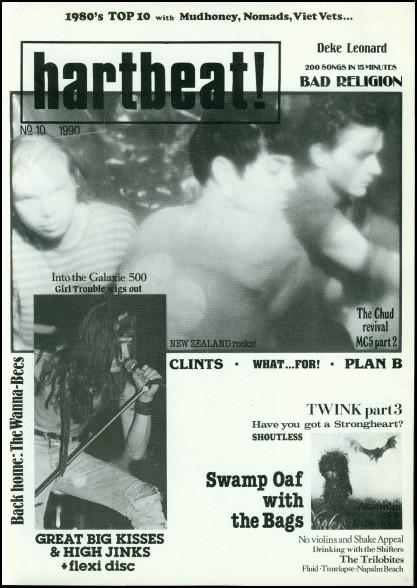 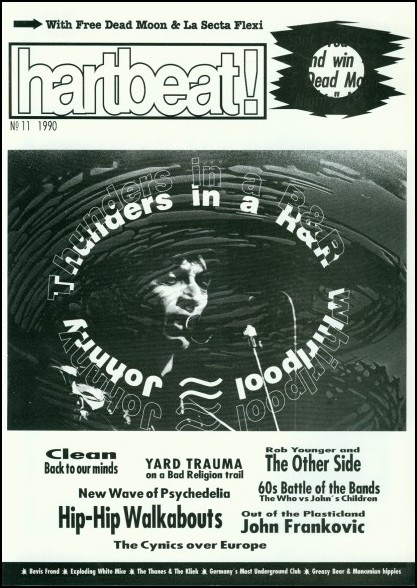 The infamous „Johnny Thunders“ issue – reviewing one of his last concerts. Sold out in next to no time.

Munster Records of Spain had 500 sleeves for the flexi printed. It looked like this: 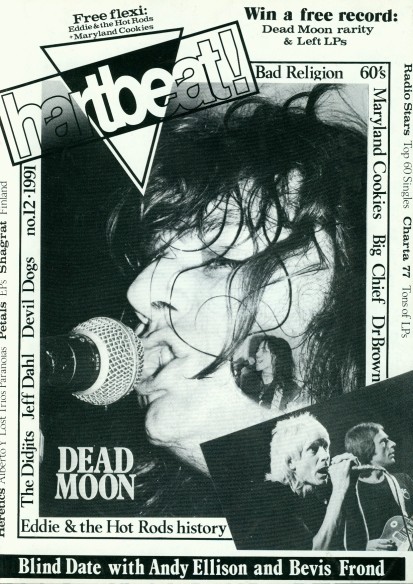 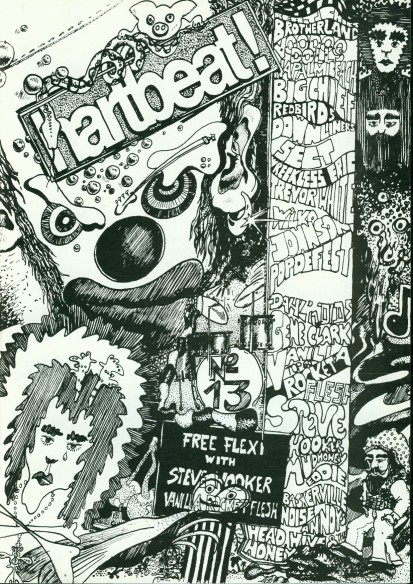 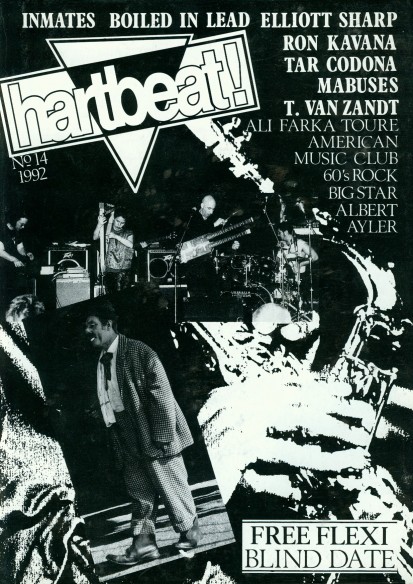 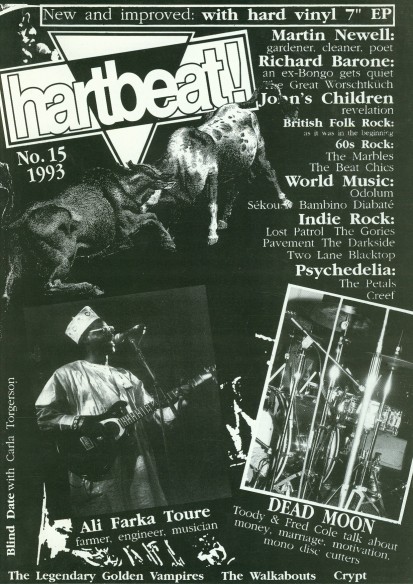 The first issue with a four-track 7″ vinyl record 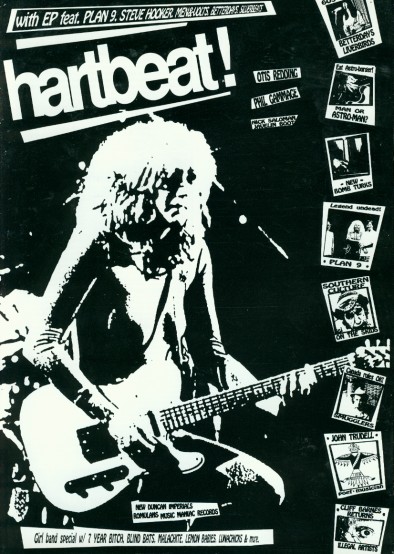 This issue came with two 7″ EPs, one of them in an art sleeve. (I still 5 or 6 copies.) I have uploaded only the tracks I’ve got the copyrights for.

Cover by Hans-Jürgen Klitsch. I guess, the 2nd best cover I ever did. 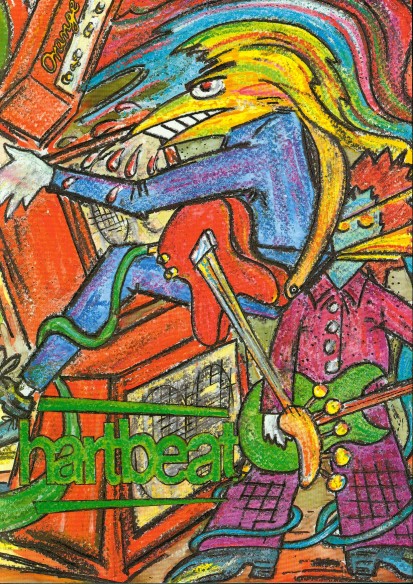 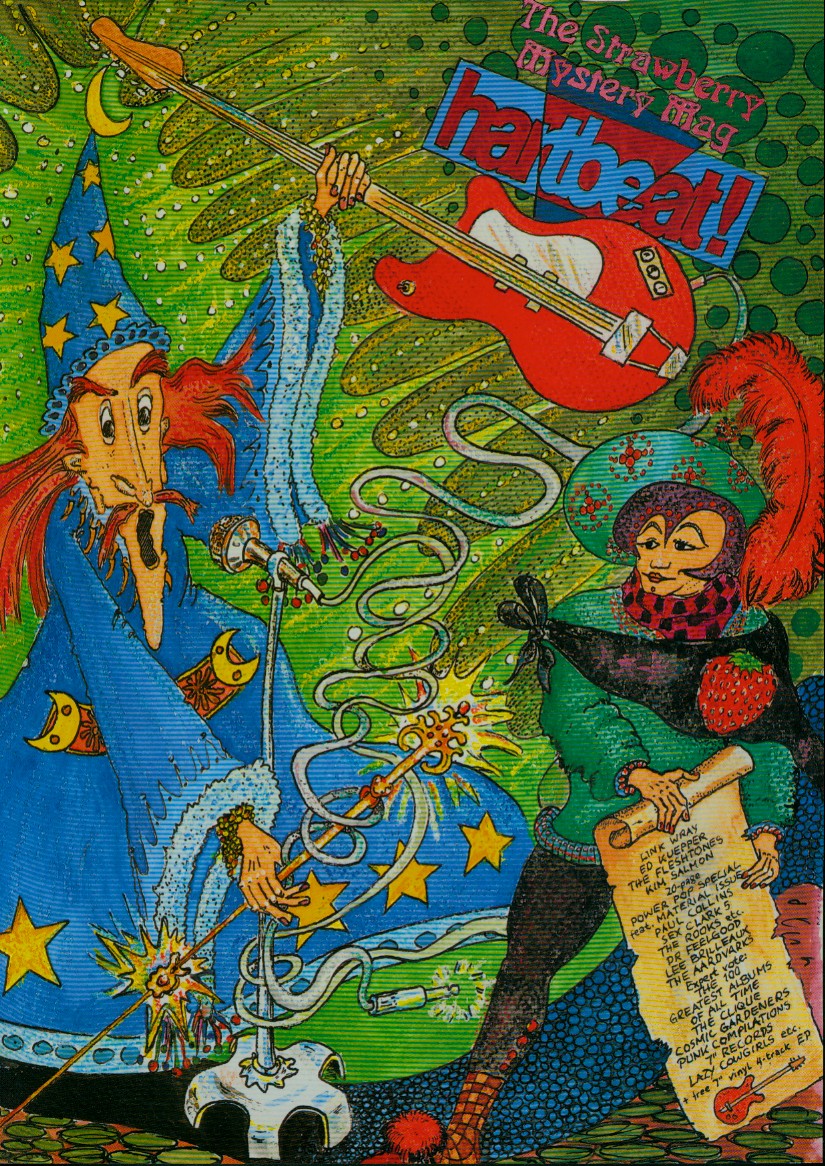 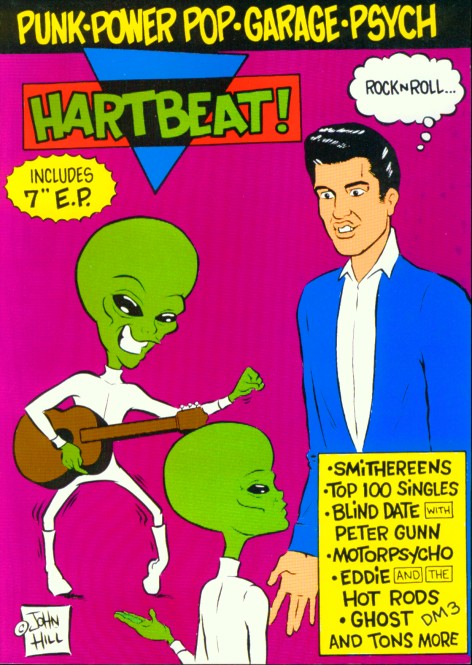 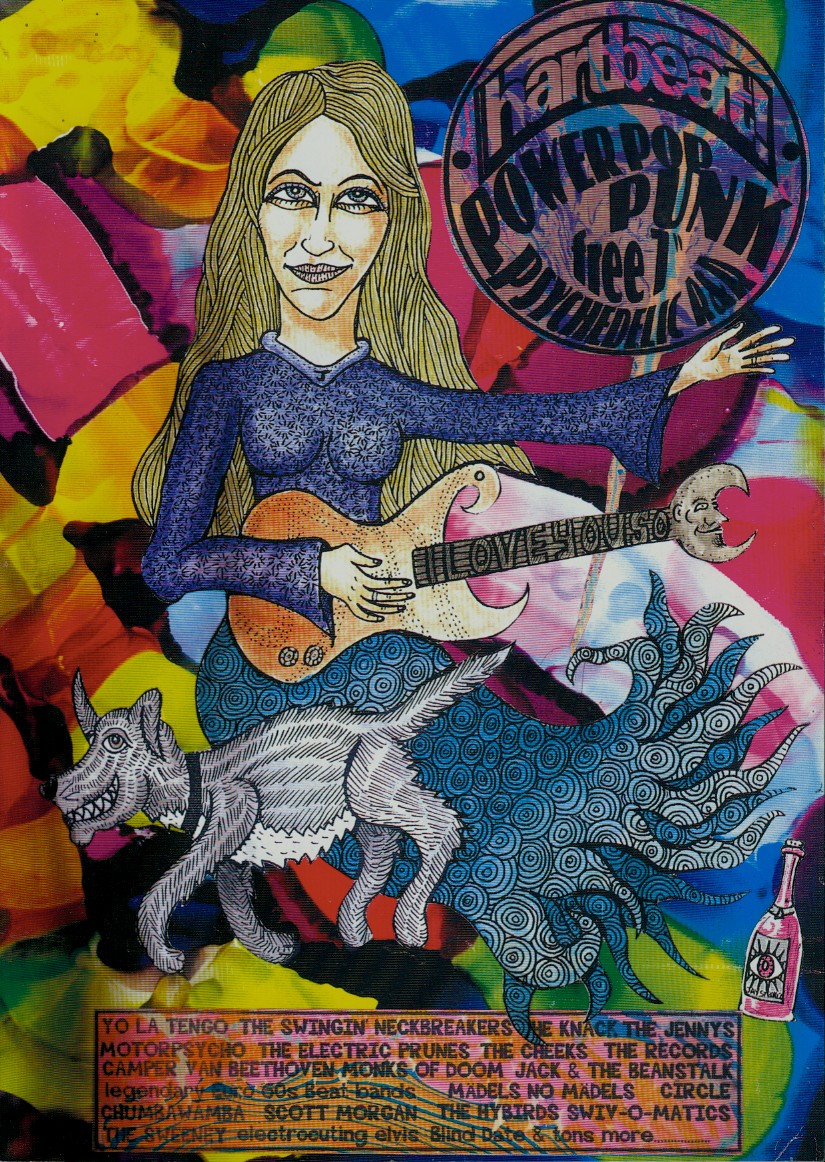 Before we leave another Mick Dillingham piece of art: 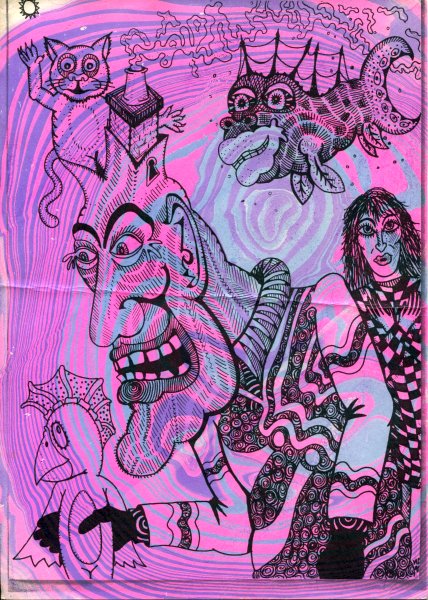