I consider THE MONKS to be a German band, so see there… K-O).

James Marshall: „I am from Scotland but I lived in Germany from 1964 until 1970. I started out by going to Germany with a Scottish band called Tommy and the Delmonts. We played our first gig in Münster at the Copacabana Club and then on to Club Barbina in Dortmund. During the first couple of months we expanded the group with a saxplayer and an organist and changed the name to „Captain Bell and the Bell-Boys “ Great sound, sadly we split up and I joined a German band. They were the backing band for Manuela, a well-known singer from Berlin with a lot of hit records and T.V. shows. They were called the 5 Dops (see there). Later on I joined another German band called the „Strangers“ (see there) from Ulm area. I really enjoyed my stay in Germany.“

>>The Londoners – Bring It On Home To Me

…and here is a performance to prove it:

>>The Move – Live on German TV

>>The Rolling Stones live in Scheveningen

The Rolling Stones played two half hour shows in Scheveningen that night. The first show was broadcast on Dutch TV, the second wasn’t. I have had a beta video of the first show, and the show is great. I knew that the second show was also filmed, but not broadcast. About 15 years ago I got a dvd of the second show and I realised why it had not been fit for TV. The show soon developed into a mass brawl of quite monumental proportions! The Rolling Stones went offstage – beaten!

What Gary Cowtan, The Shamrocks’ lead singer (the guy in the middle), remembers about the film „The Shamrocks – Portrait einer Beatband“: It was shot in Berlin in 1966. It was initially intended for TV, but, as far as I know, none of the German TV stations wanted it! It was originally planned to be around 45 minutes long and included 8 – 10 original songs (2 written by Dave Allen and the rest by me). The songs were all recorded (straight to mono, with no more than 1 overdub, as far as I remember) and enough footage was shot, but a lot was later edited out. What remained was only 15 minutes! I remember vaguely that we were later blamed for this, because of our lack of cooperation whilst filming. This was hardly surprising, as we thought the whole plot sucked and that the film was a misrepresentation of the band (at least, I know I did). When we shot the opening sequence, with the old car, I said, „The only thing missing now is Charlie Chaplin!“ We also didn’t trust the producer, Günther Schlesinger. He had ripped us off before, but wanted „another Chance to pay us back“ with this film. He never did, so our distrust was justified.

I remember watching the footage after the shooting, but never saw the final edit until years later. After the Shamrocks had split up, I remember people telling me, in ’69 or ‘70, that they had seen it in the cinema as the B-film before „Cream – The Last Concert“. I was amazed! Musical styles had changed so much since the Shamrocks‘ split, that we must have seemed quite an anachronism, compared to Cream! I later tried to trace the royalties for my songs, but, apparently the GEMA (German Copyright protection society) had no record of the film! I never saw the final version myself until the early eighties, when I just happened to bump into the cameraman, Klaus Merl, in a Berlin club. He told me he had a copy of the film and made a Betamax copy of it for me.

When I finally saw it, I was horrified! Some of the best songs had been edited out – I guess they had been too progressive for the producer. He had obviously left in only what he considered to be the „nice“ ones and taken out all the aggressive stuff, so it’s not a good representation of the band’s music in 1966, as a whole. I remember that, while we were in the studio, recording the music for the film, Schlesinger wanted the opening tune to be an instrumental, so we did „Saturday Night at the Duckpond“ (an adaptation of part of Tchaikowsky’s „Swan Lake“!), as a joke – and he loved it! Then he wanted something that sounded „sexy“, so I wrote „Turn Me On“ on the spot, just to keep him happy. We hated both of them and never played them live! The two Dave Allen songs „Still Waters Run Deep“ and „The Cool-Cold Breeze of Evening“ were remnants from a previous band of his (before the Aardvarks) and were also not normally part of our live show. Dave and I only used to play these in clubs (never on concerts), if it was getting empty, late at night, and the club manager wanted something softer! Then the rest of the band could slip off stage for a quiet beer, leaving Dave and me to hold the fort with a little „unplugged“ set! This is no discredit to Dave or his songs – he would be the first to admit that they didn’t fit into the Shamrocks‘ idiom. „Spread the News“ was more typical for the band at this time, as was „Crossbow“, which we re-recorded (plus horns and in glorious stereo!!!), soon after, as a single. This song has some disastrous edits in the film. But there were some more raunchy songs, with guitar distortion and feedback, that just got sliced out of the film. You wouldn’t believe it by watching this film, but, by late summer ’66, the Shamrocks were just beginning to get „heavy“!

Zu „Ready, Steady, Win“: I’m not sure if we played the final. I can only remember one broadcast in which we came 2nd. It probably was a preliminary round. The only band being on the show with us and who later appeared on LP are The Olympics.

Alan Stone schreibt: „Hi! Amazing! – someone who owns a Jimmy Powell record with me on, apart from myself! OK, here’s a brief history (if I go on too much, I apologise!). I was in a local group called „Willie’s Cult“ – I play tenor sax, by the way. One day we got a call from Jimmy Powell who wanted a backing band for that Saturday night. This would be about 1966. I’d heard of him and to us he was a minor star, so we were a bit awestruck at first. We drove to the gig, compared our list of tunes & keys and went on and played with no rehearsal! After the gig he asked us to join him on a permanent basis, and we were with him for about 2 years. We played universities and US Air bases. Some of the bands we shared the bill with were Georgie Fame, Bee Gees (they’d just arrived from Oz), Troggs, Herman’s Hermits, John Mayall, Eartha Kitt, Mr. Acker Bilk, The Who, Fleetwood Mac, Manfred Mann, Alan Price, Alexis Korner, etc. One tour of Scotland we met Stuart Henry the DJ who died a few years ago. One memorable gig was at the Savile Theatre, London……. Brian Epstein booked shows there. We opened for Cream, (Eric, Jack & Ginger), John Mayall and Rod Stewart & The Faces. As you say , he’d been to Germany so he knew Ginger Baker. We were impressed!! I still have the programmme. Other highlights were two Decca 45’s „Unexpected Mirrors“ / „Time Mends Broken Hearts“ DECCA F12664 and „I Just Can’t Get Over You“/“Real Cool“ DECCA F12751. Also we appeared on TV in a Soap – „The Newcomers“ on BBC. Jimmy Powell recorded for Young Blood label in 1968/9 after I’d left. I’ve got tapes of us somewhere – anyway, if you want more cuttings etc., let me know & I’ll email them. Here’s a photo taken by the stage door of the Savile Theatre.“ Alan is second from the left.

Robert Tannock writes: „It’s nice to know that someone remembers us. You were right we only recorded two singles, as after this we came home although we still had a recording contract. This was due to the fact that I was ill and needed a rest. About three years ago we were on Sky tv show called „Beat Beat Beat“, which was recorded in Gemany around 1965 backing an American singer called Gene Williams. A friend saw it and taped one of the songs: Under The Boardwalk. We also did another tv show in1966 on ARD 1. Programm, but I cannot remember the name of the programme. We were miming to our record Too Late Now. We toured Germany for about 36 months in total, and played in such places as Frankfurt K52, the Weindorf club, also Mainz, Cafe Dehos. Hannover, Darmstadt, Star-Club in Karlsruhe and Duisburg being some of the cities. We met Rolf Wittman in Waldorf, if I remember correctly, and played with The Searchers there… or was it Beibesheim? The name of the club maybe was Waldorf. When we came back to Scotland, the band split up. I went on to play in new bands for a further 25 years. Is it possible you can trace the recordings of these tv shows as I would love to get a copy of them, I do not mind paying for these. Perhaps this is impossible after all those years.“ 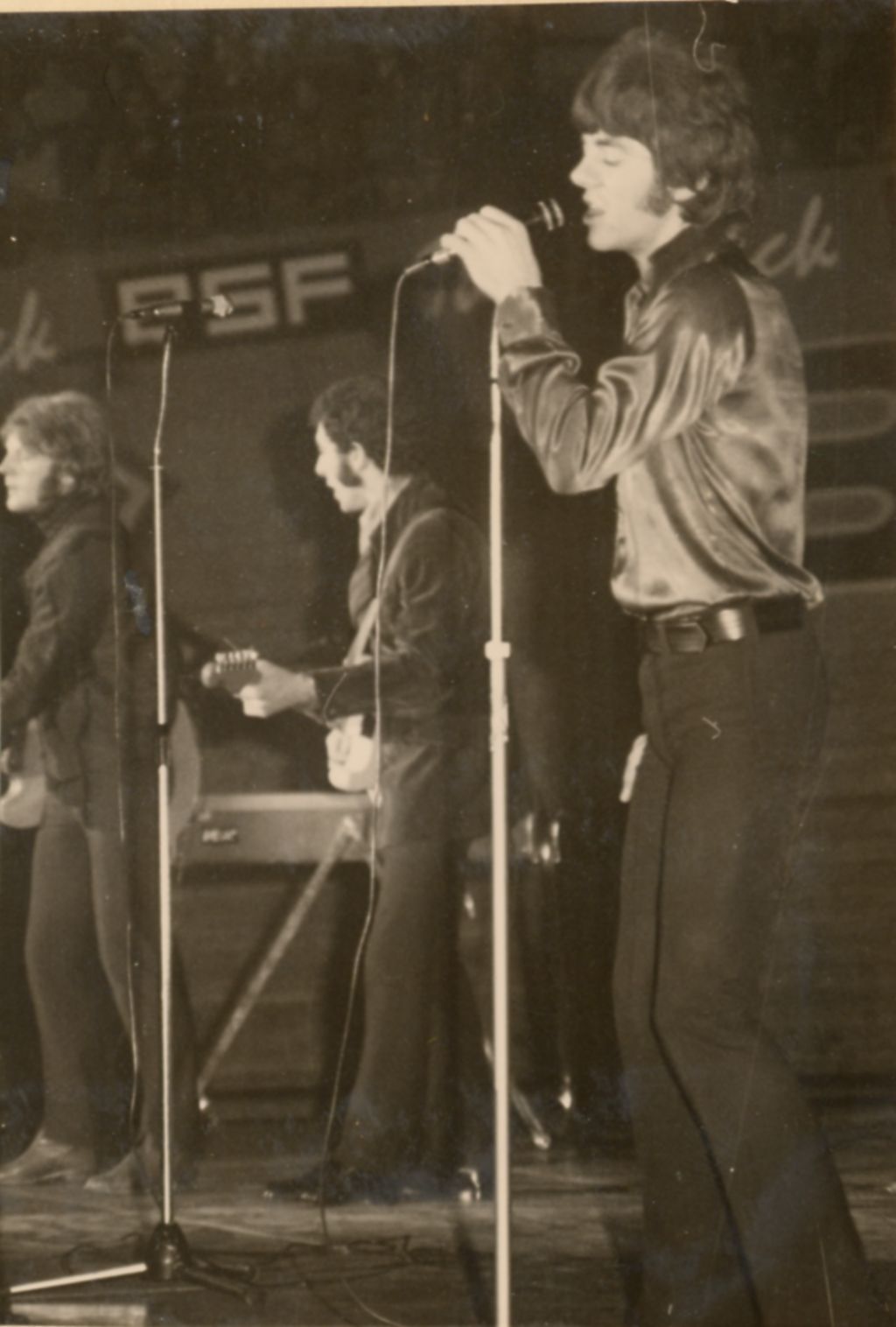